Each competition is open exclusively to College of Law students which allows for continued training for our students. AHS provides “Boot Camp” instruction at the outset of each competition, and local attorneys, professors, and jurists provide advice and feedback through each round of the competition. The competitions encourage every participant to further develop advocacy skills needed in today’s legal practice.

The first Lionel O. Grossman Trial Competition was held in 1978 and was named for the College of Law alumnus, Lionel O. Grossman. Mr. Grossman was known for his overwhelming contributions to the local Syracuse community including roles as director of the Syracuse Symphony Orchestra, Syracuse Boy Scout Commissioner, Director of the YYHA and the Jewish Community Center, Director of the Jewish Welfare Federation, and leader of the local Israel Bond Drive. He was also well known for his devotion to the fight against cerebral palsy. Mr. Grossman founded the Cerebral Palsy Center, served as President of the United Cerebral Palsy Association of Syracuse and New York, and served as co-counsel to the National Cerebral Palsy Legislative Committee. 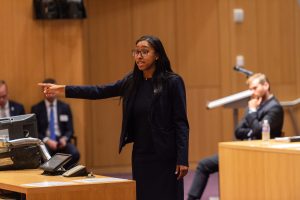 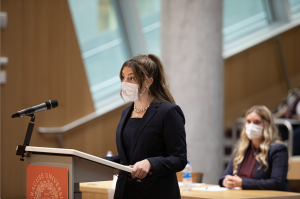 Created in 2011, this annual competition continues to offer students at Syracuse University College of Law the opportunity to grow as oral advocates and hone their experience in the world of negotiation.

The Alternative Dispute Resolution Competition is open to two-person teams consisting of second- and third-year law students. The competition gives students an opportunity to practice resolving clients’ conflicts through arbitration, mediation, and negotiation. Practitioners evaluate teams over the course of three days of preliminary rounds which culminate in a final round that is open to the public.

The Travis H.D. Lewin Advocacy Honor Society held the first Alternative Dispute Resolution Competition at the College of Law in 2012–2013 in response to the increasing demand for dispute resolution training outside of traditional litigation. Local and longtime supporting firm Bond, Schoeneck & King began its sponsorship of the ADR competition in 2014–2015. 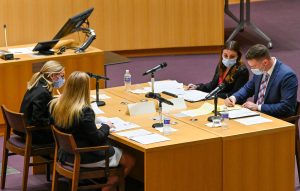 Only first year students participate in the annual Hancock Estabrook Competition held at the beginning of Spring semester. Students argue issues in a case on appeal before a panel of “judges” who advise as well as evaluate them throughout the competition. Moot Court Honor Society members judge beginning rounds of the competition, and local judges and practitioners evaluate the final round. 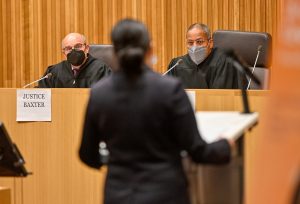 Participating students will gain experience with legal issues in the industry, such as labor relations, contract negotiation, intellectual property, antitrust, agency, and in some cases, criminal law. We hope the application of these legal concepts to the context of sports and entertainment will provide an educational and exciting experience for the competitors, judges, and audience!

Jointly hosted by the Travis H.D. Lewin Advocacy Honor Society and the Entertainment and Sports Law Society, the competition has quickly become popular with the students. 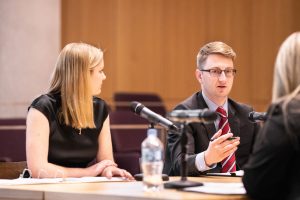 More from this Section